Ilana Schwartz became a Jews for a Secular Democracy (JFASD) Volunteer Leader at age 12 and quickly demonstrated how, at any age, a caring and devoted activist can bring positive change into the world.

A member of the SHJ Massachusetts affiliate Kahal B’raira, Ilana decided to lead an advocacy campaign as her mitzvah project. She initially planned to meet with legislators in support of the Massachusetts Safe Communities Act, legislation to limit local cooperation with federal immigration enforcement and allow immigrant communities to live in safety.

Immigration policies are often tainted by religious discrimination, even those that are not so blatantly labeled “Muslim ban.” Immigration is therefore one of the focuses of the JFASD initiative. As Jews, we know from our own history what it meant for our people to be discriminated against, through “legal” immigration restrictions that prevented many of our own relatives from finding safety on U.S. shores when we needed it most before World War II. We can’t stand silently by as it happens to others.

This April, however, as COVID-19 spread, Schwartz was forced to modify her advocacy to an entirely remote campaign, writing lawmakers instead of meeting with them at the statehouse. Likewise, recognizing the financial challenges that the pandemic imposed upon Massachusetts residents, Schwartz shifted her advocacy to include emergency relief legislation in addition to the Safe Communities Act. 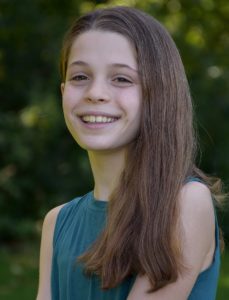 Coordinated by Ilana, supporters of Jews for a Secular Democracy in Massachusetts took action to ensure an equitable government response that wouldn’t leave vulnerable communities behind. Fifty-nine JFASD supporters joined a letter addressed to Massachusetts House Speaker Robert DeLeo and Senate President Karen Spika expressing support for legislation to put a moratorium on evictions during the pandemic, provide emergency cash assistance, and expand eligibility for unemployment insurance to workers impacted by COVID-19.

As JFASD Community Organizer, I worked with Ilana to develop and implement her advocacy. She is a fantastic volunteer who really embraces the values of JFASD, and it’s been my pleasure to work with her. I hope that many more young activists follow in Ilana’s footsteps and choose to volunteer with JFASD for their mitzvah projects! To that end, my JFASD colleagues and I are currently working on codifying what we learned working with Ilana into a toolkit so that other b’nai mitzvah students can emulate her project and bring their own activism into changing their communities.

Thanks in part to Ilana’s advocacy, the JFASD supporters she mobilized, and others, the Massachusetts Legislature passed a moratorium on evictions that Governor Charlie Baker then signed. Other legislation, including the Safe Communities Act, remains under consideration by the Legislature.

Click here to read a copy of Ilana’s letter to Massachusetts’ legislative leaders.

Lincoln Dow is the Community Organizer of Jews for a Secular Democracy, a pluralistic initiative of the Society for Humanistic Judaism (SHJ). He studies politics at New York University. A native Houstonian, he’s previously worked in Texas politics and led a student advocacy organization in that state. He is Jewish by heritage, an atheist and a humanist, and proud to be a part of SHJ.