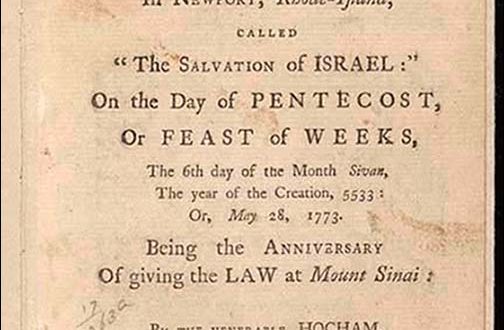 An important point related to why this page is called Jews for a Secular Democracy: look at Jewish history in America, and it becomes acutely clear that no one has had a greater interest in secular democracy than Jews, whether observant or not. That is true both on the side of benefiting from the freedom of belief guaranteed by the Constitution, but also on the championing side, where Jews have fought to see that others experience the same freedom.

Many of these Jewish champions of secular governance over history have indeed been observant, and not “secular” at all. But, probably because of their unique history in Europe, they saw — perhaps more clearly than some others — that secular governance was the one government system that would protect their freedom to practice their religious beliefs.

So we seek to mobilize all Jews to continue that tradition of being the strong and articulate defenders and advocates for secular democracy that they have always been. But the story of the Jews as a small religious minority living in American secular democracy also illustrates the broader and most fundamental point: governance in a pluralistic society can only be democratic if it is secular.

At the time of the founding of our republic, many of the original colonies had their official state religion: Congregationalist for Massachusetts, Anglican for Virginia, Catholics of Maryland, Quakers in Pennsylvania, Universalists in Massachusetts, Baptists in the South, etc. The cities of the East also had small but vibrant Jewish communities. Since the population they sought to meld into a federal union was pluralistic, especially for that time in history, clearly a document forming the blueprint for a federal union of these diverse colonies could not adopt any one of those religions over others as the official nation-state religion. Plus the Founders had recently been under the thumb of a colonial monarchy that DID have an official state religion. They had not appreciated the consequences of having a singular belief system mandated by a theocratic monarchy.

So, in their wisdom, the Founders designed a system of governance that not only offered a forum for debating differing political views — remember the debates at that time surrounding how strong the Federal government should be — it also allowed for freedom to have and express different religious beliefs, neither supported nor fettered by government. It follows that, in order for any one group to have freedom of belief, all must have it.

Dr. Richard D. Logan is a volunteer leader of Jews for a Secular Democracy; board president of the Society for Humanistic Judaism; and a retired Professor of Human Development. He has a BA in Anthropology from Harvard College and a PhD in Human Development from the University of Chicago where he studied under Bruno Bettelheim and Lawrence Kohlberg. Most of his career was at UW – Green Bay but he also had appointments at the University of Nairobi and Vassar College, and a sabbatical at the University of Kent in Canterbury England. He has published on adolescent identity, American individualism, the emergence of the self through Western history, and the state of higher education. He also authored a book on the psychology of solitary ordeals, and another on the true survival story of a young girl lost at sea. He also chaired the Faculty Executive Committee. Since retiring he has served on several non-profit boards.