Jews for a Secular Democracy is a pluralistic initiative for Jews of any or no denomination, and friends and family members, who are deeply concerned about the growing influence of religious fundamentalism on government policy-making. 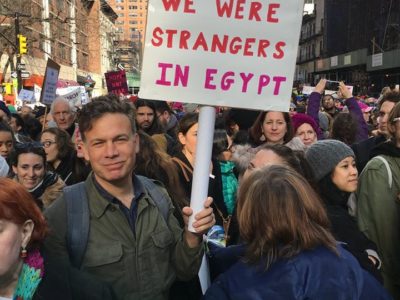 Many of today’s most important issues relate to the separation of church and state. And while Jews should and do get involved with organizations working on those specific issues—such as LGBTQ equality, women’s equality, reproductive rights, immigrants’ and refugees’ rights, climate change, public-school funding, and so much more—we believe that an understanding of the common challenge threaded throughout all these issues will also provide shared tactics to counter the current attacks on our rights. And that common challenge is the breach in the wall of separation between church and state.

The Jewish experience in America is one of gaining more rights, thanks to the separation of religion and government. Yet we had to fight for those rights:

If you feel that our nation is slipping backwards on issues related to First Amendment protections intended to keep one religion from unduly influencing government policy, please join your voice with ours!

Lincoln Dow is the Community Organizer of Jews for a Secular Democracy. He is based in New York and can be reached by email here.

Paul Golin is Staff Lead of Jews for a Secular Democracy. He is based in New York and can be reached by email here.

Sarah Levin is the Program Coordinator of Jews for a Secular Democracy. She is based in Los Angeles and can be reached by email here.

Jews for a Secular Democracy is a pluralistic initiative of the Society for Humanistic Judaism (SHJ), a 501c3 non-profit organization that has been in continuous operation since 1969. SHJ has dedicated a percentage of its staff time and resources to this cause, and any donations will be earmarked specifically to Jews for a Secular Democracy. Please join us as a Volunteer Leader in your community! Thank you!