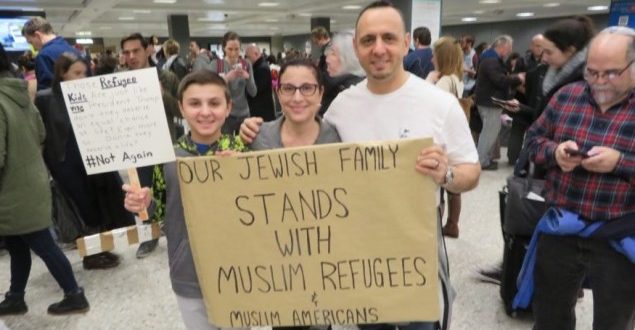 Jews have a special understanding of and appreciation for secular democracy and its institutions and for the protections of rights it affords, not just to them as Jews but to everyone, and especially other ethnic minorities. It also affords protection to people of all beliefs and not just to a religious majority, and it affords equal protection to those who choose humanism, skepticism, agnosticism, or atheism. Secular governance by its very nature and Constitutional grounding does not — indeed CANnot — take sides on matters of personal and cultural belief.

We were refugees too, within living memory, and government-sanctioned religious persecution kept all but this one ship from the safety of our shores. We wouldn’t let this happen again to our people. How can we stand idly by while it happens to others?!

Sheila Sebor is volunteer chair of Jews for a Secular Democracy. She also serves on the boards of the Society for Humanistic Judaism and Kol Hadash Humanistic Congregation in Lincolnshire, IL. She has 25+ years’ experience managing a non-profit membership organization.