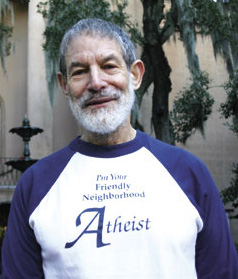 The United States was founded as a secular democracy, and there should never be a need to defend that principle. Our framers established the first government in history to separate religion and government. They formed a secular nation whose authority rests with “We the People” (the first three words of the U.S. Constitution) and not with “Thou the Deity.” They created a Constitution in which our government acknowledges no gods, the better to ensure freedom of conscience.

The only mentions of religion in the U.S. Constitution are exclusionary. The First Amendment prohibits Congress from making laws respecting an establishment of religion, or prohibiting the free exercise thereof. Article Six prohibits religious tests for public office. Article Six inspired me to become an activist in secular causes. When I discovered in 1990 that our South Carolina Constitution prohibited atheists from holding public office, I challenged that provision by running for governor as the “candidate without a prayer.” In 1997, I won a unanimous decision in the South Carolina Supreme Court, invalidating the unconstitutional provision and recognizing that atheists have the right to hold public office in South Carolina.

More recently, we learned on January 6, 2021, how fragile our country’s democracy can be as Donald Trump encouraged a mob of terrorists to storm the nation’s Capitol building, which they did in an attempt to undermine and overturn our recent presidential election. Trump’s mob included many Christian nationalists. Christian nationalism advocates for privileging Christianity in our government. Christian extremism is a threat to American democracy on the national level, and also on the state level where some battles for separation of religion and government are being fought.

The rioters in the Capitol building carried Confederate and Trump flags, along with Christian symbols and signs that said “Jesus 2020.” Some of these white supremacists must have been particularly upset because it was the same day as the historic election of the first African-American senator and the first Jewish senator in Georgia. Trump came to and maintained his power in part because of overwhelming support of white Christian Evangelicals.

My initial involvement with promoting a secular democracy on the national level was in helping to found the Secular Coalition for America in 2002. Its mission is to increase the visibility and respectability of nontheistic viewpoints, and to protect and strengthen the secular character of our government. There are 19 national member organizations in the Secular Coalition, including the Society for Humanistic Judaism. The Secular Coalition lobbies Congress for the separation of religion and government. The Coalition works to rebuild this Wall of Separation and to strengthen our secular democracy.

I’m so pleased that “Jews for a Secular Democracy” exists and works for the values I cherish. I think most Jews recognize that a secular democracy does not just benefit Jews and other minorities. A secular democracy benefits everyone, except those who think their religion deserves special privileges from the government.

Herb Silverman is a retired math professor and author of Candidate Without a Prayer: An Autobiography of a Jewish Atheist in the Bible Belt.