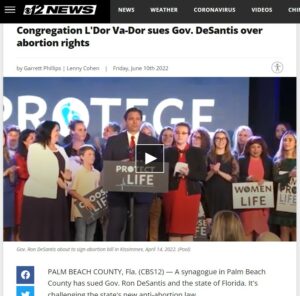 Florida Jews for a Secular Democracy, a pluralistic Jewish initiative committed to advancing the Constitutional principle of separation of church and state, applauds the filing of this legal suit based on religious freedom. It makes the important argument that the law, which enters into force on July 1, 2022, violates religious freedom and separation of church and state protections in Article 1, Section 3 of the Florida Constitution, which states, “There shall be no law respecting the establishment of religion or prohibiting or penalizing the free expression thereof.”

The legal suit recognizes that the 15-week abortion ban is a means by which one religious group is imposing its own views on all Florida residents. Other religious groups, such as Jews, do not share the same view of the beginning of life as those contained in the new law. The suit explains, “This failure to maintain the separation of church and state, like so many other laws in other lands throughout history, threatens the Jewish family, and thus also threatens the Jewish people by imposing the laws of other religions upon Jews.”

Rick Gold, organizer of Florida Jews for a Secular Democracy, said, “The 15-week abortion ban is an attack on religious freedom. L’Dor Va-Dor’s suit demands that the court declare it unconstitutional.”

Florida Jews for a Secular Democracy believes that religious freedom, including the principle of separation of church and state, is essential for protection of religious minorities. We believe that reproductive rights, including the right to abortion, are human rights. We hold that it is unconstitutional to base governmental policy regulating abortion on a Christian-fundamentalist approach. The proper role of government in Florida is not to privilege one set of religious views over others, but to protect each person’s right and ability to make decisions according to their own beliefs and values.

We congratulate Congregation L’Dor Va-Dor for filing a legal suit that demands an injunction for HB 5 based on its violation of religious freedom. We ask that the circuit court provide immediate relief and temporary and permanent injunction of HB5.

The legal suit also complements the arguments made in a separate suit filed by the ACLU, Planned Parenthood and Florida family planning centers, which argues that the 15-week abortion ban violates the right to privacy stated in Article 1, Section 23 the Florida Constitution, “Every natural person has the right to be let alone and free from governmental intrusion into the person’s private life except as otherwise provided herein.”