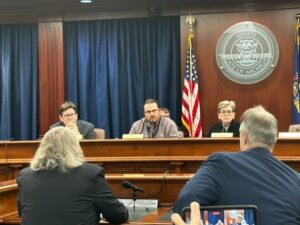 As a social justice organizer, I like to be proactive. However, sometimes it’s necessary to be reactive. Michigan’s recent statewide partial recount of Propositions 2 and 3 was one of those times.

Proposition 2 (Promote the Vote) and Proposition 3 (Reproductive Freedom For All) passed by overwhelming margins. A statewide partial recount was nevertheless requested by a Bloomfield Hills man on behalf of the Election Integrity Force (EIF). Michigan law has very different guidelines for candidate recounts and proposal recounts. To request a candidate recount, the candidate must have a “good faith belief” that due to either mistake or fraud, there is a reasonable chance that a recount could change the election outcome. But any Michigan voter can request a recount for a proposal for any (or no) reason. The requester is required to pay a fee of $125/precinct. The rest of the bill falls to the taxpayers. Up until now, the fee has been a sufficient deterrent against frivolous recounts (the last proposal recount was 1968’s Daylight Savings Time referendum). All four members, including two Democrats and two Republicans, expressed that they did not want to approve the recount, but that they lacked the authority to stop it. It was clear that they all viewed the recount as being frivolous. 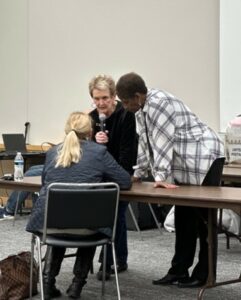 EIF knew that the recount would not change the results, but hoped it would provide an opportunity to conduct deeper investigations. Basically, they hoped that this would sow doubt in the security of our elections and enable them to throw open the door to election deniers and conspiracy theories. This is clear because the number of votes requested and allowed to be recounted was less than the (huge) margin of victory! Even if the recount had flipped every single “yes” vote to a “no” in those precincts, the state-wide results would not have been changed. The fee, approximately $75,000, was paid by the America Project, headed by former Overstock CEO Patrick Byrne and former National Security Advisor Michael Flynn. Michigan taxpayers are left paying over one million dollars.

I’d been working on Props 2 and 3 for so long, that even though I knew the recount could not change the election outcome, I still felt like I had to see the entire process through. I turned to our wonderful volunteers—the same people who helped collect signatures, helped educate
voters, and who helped get out the vote. Our volunteers went through training and were credentialed as official Recount Challengers. I personally observed the recounts in Oakland, Wayne and Macomb counties.

Throughout this process, I’ve been struck by how much more education and training is needed. The EIF did not know (or did not believe) that requesting a recount does not grant any investigatory authority. The EIF attorney seemed to think that they would be empowered to issue
subpoenas and conduct, or initiate, investigations. The Board of State Canvassers (BOSC) tried to clarify that it is not an investigatory body and that doing a recount does not empower anyone to issue subpoenas. A recount is very limited in scope. The only thing it does is confirm or amend the tabulation of the specific race that is being recounted. It does not create an ability to examine things like: poll books, voter files, signature fields, ballot stubs, or any race other than the one specified in the recount. When done correctly, a recount is incredibly tedious and boring.

In order to be a Recount Challenger, you first have to go through a training. Any group that is officially identified as “an interested party” can conduct its own training and provide their own credentials. In this case, Promote the Vote, Promote the Vote 2022, Reproductive Freedom For All, the Michigan Democratic Party, and EIF were named as “Interested Parties.” EIF conducted its own training and the other parties coordinated and acted as one body. I personally would love to have these trainings streamlined and conducted by the Secretary of State. It was clear that EIF had imparted a lot of disinformation in their training.

There are strict rules in a recount. Challengers are there to observe. They are not allowed to touch anything on the table other than their own notepad. They are not allowed to slow down the process and should not expect the recount workers to stop and explain things, answer questions, or hold things up for purposes of photographing. There are two counters per table and there are chairs opposite the counters for challengers. The challengers can watch and view the election material as best as they can while sitting in the chair. And the challenger only has the right to see the section of the ballot that is the subject of the recount. The only time the challenger should interrupt is if they are making a formal challenge to a specific ballot. However, the EIF training instructed volunteers that they could, and should, examine both sides of the ballot, the ballot stubs, the returned Absentee ballot envelopes and the secrecy sleeves.

I observed several EIF challengers making accusations of “extreme obstruction” when the counters would not stop their process to answer questions or to facilitate taking photos. There were times when the local sheriff needed to intervene. At one point there were two sheriffs at the table where I was observing because an EIF challenger refused to stop taking videos of me and of the counters. (They were allowed to photograph the election material.) A challenger in Marquette needed to be forcibly removed. Jackson county had to halt its count for several hours because of EIF’s insistence that they view both sides of the ballot.

A lot of time, money, and energy could have been spared had the EIF understood Michigan election law.

Yesterday marked the end of the frivolous recount. Well at least it is the end of this chapter. I fully expect the election deniers to file a lawsuit. All of the county board of canvassers, along with representatives of the Director of Elections, discussed and voted on all of the many challenges brought forth at the recount. EIF appealed the decision of over 100 of these challenges and these were sent to the Board of State Canvassers (BOSC) for resolution. The BOSC rejected all but one of the challenges.

The meeting lasted over 7 hours and I was impressed by the patience displayed by the Board. One attorney hit the nail on the head when he said we should be before an educational body instead of the BOSC, as the denier’s challenges rested on their lack of knowledge about Michigan election law and the recount process.

I will add my name to the chorus of voices asking that our recount laws be changed. I join Secretary of State Jocelyn Benson and attorney Mark Brewer in their call to the legislature to close the loophole that allowed a group of election deniers to force the state to undergo this expensive and time-consuming recount. We cannot, and should not, silence election deniers. But we also should not be forced to spend over a million dollars and weeks of state resources to indulge them.